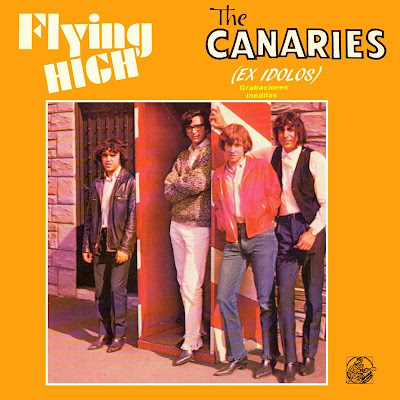 "FLYING HIGH," marks the American Record Debut of a versatile Spanish musical group known as "THE CANARIES." Although these singers are very well known in their native Spain, and have had many smash records in Spain and Europe, they are still relatively unknown in America. The name 'THE CANARIES" was taken from the Canary Islands, (off the coast of Spain), where they were all born.

The group is composed of four seasoned entertainers who are all in their early twenties. They sing, accompany themselves on musical instruments, and also write most of their own songs.
Jose Luzardo Gutierrez, known as "Tato," and Eduardo Bautista Garcia, known as "Teddy," speak fluent Englísh. The other members of the qroup, Raphael Izquierdo Suarez, "Rapha." and German Perez Zorrila, "Hernan," have learned English by singing the lyrics to the songs they perform.

"Teddy", the leader of the group, is also the lead singer. He plays rhythm guitar and harmonica. He speaks and sings equally well in English, French, Italian, and Spanish. All the other members ot 'THE CANARIES" are musical students, and their knowledge of the classical Spanish melodies flavor the songs they compose and play. Unlike most modern Rock and Roll groups, these young men all have had classical music backgrounds and stem from long-established families of the Canary Islands.

As the number one night club group in Spain, it was only natural for people to compare the Canaríes with the Beatles. When asked to comment, Teddy's reply was, "No comparison! Why, Canaries eat Beatles for breakfast every morning!"

"FLYING HIGH" combines the international vocal talents of "THE CANARIES" with the native production ability of their American Producers, "THE TOKENS." Together they have created an Album with a unique sound and universal appeal. We know you will enjoy it. 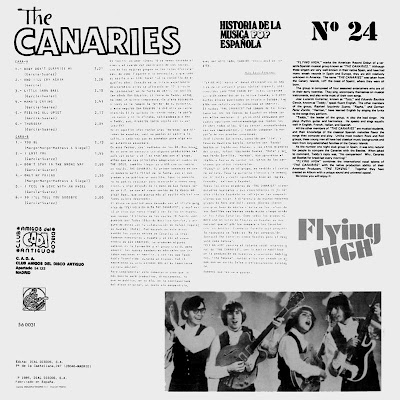